As 2022 comes to a close, we once again turn to the metal nerd’s favorite pastime: debating about what the best album of the year was. Instead of regurgitating the opinions of a single metal nerd (i.e., myself), I decided to ask musicians from 10 local St. Louis metal bands for their personal album of the year. Their selections were diverse and eclectic, and a great reflection of the talented people who make up the St. Louis underground metal scene.

Selected by Nick Muckerman, guitarist and songwriter for Life Sucks and Hot Corpse

There were a ton of great albums released in 2022; narrowing it down to one album seemed almost impossible to me. But, if I had to pick the one album that stood out to me the most, it is definitely Artificial Brain. This is the band’s third and final recording they are releasing as Artificial Brain. It’s hard to believe a band this great is calling it quits, but I’m glad to see them go out on such a high note. This album is tech-death at its core, but it is also dripping with a black metal and sci-fi inspired, cryptic, dissonant sound. It creates a chaotic and mysteriously beautiful world that I have no problem getting lost in with every listen. It’s got insanely unique riffs, blast beats and guttural frog vocals. What else could you want?

Retaliatory Measures is a record that will hold you hostage and abuse your eardrums for its entire runtime, until you develop riff-induced Stockholm Syndrome. Brothers Jim and Joe Kahmann [guitarist and drummer for Deterioration] are masters of packing so many memorable riffs into a twenty-minute record that it’s impossible to get sick of. The day I met Joe, I brought up the band Viscera Infest [Japanese death metal band known for their high-speed drumming], and he seemed insulted that I’d compare them to his own drumming. If you’ve listened to much Deterioration, especially their earlier stuff, you can’t help but see why: Joe blasts like a gatling gun and seemingly never uses fills in order to take a breather. I think he might be a robot.

“Recruiting to Recalibrate” [from Retaliatory Measures] might just be the perfect deathgrind song. Clocking in at 58 seconds, the bulk of the track is composed of blast beats and ear-splitting shrieks, before it halts with a sudden full-stop. In the negative space, a single strike of the ride cymbal’s bell rings out. This process repeats once, and after another drop out, things get moshy. The vocals devolve into percussive, staccato death growls while the guitar and drums turn totally punk. This lethal combo will cause the true cult to sprout a unibrow and forget how to speak.

Selected by Eric Johnson, drummer for At My Worst

For 2022, Lamb of God takes the title for best release with Omens. There’s no replacement for an album full of catchy, heavy, and unmistakable riffs. When you pile on the thicker than ever drum performance and always guttural vocals from Randy [Blythe], it’s hard to be left unhappy with this one. This deep into their career, it’s crazy to hear how full of life these songs are. The aura of Lamb of God is proven to still be shining brightly for years to come thanks to this album. Two thumbs up.

Jack: 2022 was a year with a lot of incredible releases within the metal space. From Shadow of Intent’s Elegy,to Paleface’s Fear & Dagger, to Angelmaker’s Sanctum, it’s hard to pick just one. For me personally, Lorna Shore’s new album Pain Remains stands above all others. From every single released prior to its release, through the album itself and in particular the three-part title song, this album has everything. Incredibly fast blast beats, shredding solos, disgustingly brutal vocals and patterns; the album truly takes you through every emotion under the sun. There’s a reason Lorna Shore has been blowing up, and I hope they continue to open the eyes of people who are not typically fans of the deathcore genre.

Kurtis: A wide variety of releases caught my eye throughout the year: from Secrets’ The Collapse, to Color Decay by metalcore giants The Devil Wears Prada, to the viral moments sprinkled in by Bad Omens’ The Death Of Peace Of Mind [which became popular through exposure on TikTok and other social media platforms]. None did it better than Lorna Shore with their new album Pain Remains, though. After blowing up with their 2021 single “To the Hellfire”, Lorna Shore have not slowed down at all. From delivering the intense auditory beatdown we’ve come to expect in “Cursed To Die” [from Pain Remains], to adding even more layers of passion and intensity in “Pain Remains I: Dancing Like Flames”, Lorna Shore is sure to keep the listener locked in from start to finish.

When I look back through the past year, I find myself pretending I’m sitting at a bar, in front of a jukebox, as I try to narrow down my favorite album of 2022. Through the madness of my journey, I landed on Remade in Misery by Memphis May Fire. Once I listened to it, I was hooked by the heavy drum beats and the insane guitar riffs of the opening track, “Blood & Water.” Then the singing/screaming started happening: wow, [Memphis May Fire vocalist] Matty Mullins just topped it off like a fine cherry. Maybe it’s just me, but it was a big nostalgic slap of everything I love, from the lyrics to the melodies. This album as a whole was my favorite, and still is going into the new year.

Selected by David Bruno, vocalist and songwriter for Summoning the Lich

2022 had some absolutely amazing albums that I jammed ridiculously hard to this year. I think the album that I really needed most came from right here in St. Louis from our friends in Polterguts. Their album, Gods Over Broken People, is melancholy personified; a heavy and pulverizing aural masterpiece. It sums up the frustrations so many of us have with where we are in life, and the Midwest experience. In addition to being really cathartic, it just absolutely brings the heat and never stops. It’s punishing and groovy while still riffing and pounding hard when it needs to. Martin [Ruppert] sounds like an actual monster lamenting its own creation, and the production is exactly what I want from this style of, whatever brand of metal you want to call them. Anyone who listens to heavy music in general is missing out by sleeping on this record, it slays!

Selected by Noah Hill, guitarist and vocalist for Bloodspawn

This past year was hectic for me so I’ve slacked on a lot of contemporary releases, although there are a few that stuck out. I’m not as into full-length albums as I am EPs and demos, but there was one LP this year that did not disappoint me in the slightest: Putrid Planet. Putrid Liquid is a project consisting of members of Moiscus [Dayton, OH, grindcore band] and a guy who goes by “Slamgelo.” It’s really fun, ultra-brutal, goregrind/death metal, and there’s not a ton of stuff out there like that to my knowledge.

I’m really hyped on this project because I love Reegan’s drumming. He has such a unique way of making brutal death metal drumming interesting. Most people try to go as fast as they can, which takes the fun out of it for me. Reegan plays drums like if Godzilla took mushrooms for the first time and pondered the universe before vaporizing the earth. You know we love a man that plays with his food!

Selected by Martin Ruppert, vocalist and songwriter for Polterguts

A lot of good shit came out this year, but I think my favorite metal album has to be The Nine Choirs by Tribal Gaze. Their new album is an absolute ass-beater. Something about it keeps me coming back. Crushing riffs and death metal vocals that don’t get too weird, but just leave you with solid head bangs from front to back. I’m also going to shout out Gridiron and their new album No Good At Goodbyes for being my favorite album for the gym this year.

Selected by Paul Oster, vocalist and songwriter for This Is Me Breathing

2022 was a year that saw great releases in all subgenres of metal. However, none stuck with me like Seething Malevolence, the sophomore LP from Connecticut’s Vomit Forth. From the start of the album, you’re hit with an absolute barrage of blast beats, overblown bass drops, and vocals that sound like they were recorded in the middle of a hurricane. Don’t get me wrong: I love good production as much as the next guy. But there’s something about the primitive sound that reminds me of some of my favorite slam and deathcore records from the late ‘90s/early ‘00s that made me fall in love with the genre.

There’s no flash, no melody, just pure brutality start to finish. The album wraps up right under the thirty-minute mark, ensuring that no track overstays its welcome. From the overbearing beat down of “Pain Tolerance” to the anthemic “Predatory Savior”, this album has a little something for any fan of extreme metal. If you’re looking for some fun, simple, over-the-top death metal, I can’t recommend this album enough.

Selected by Jordan Hageman, guitarist and songwriter for The Cult Sounds and Interpersonal

I have been following the Ukrainian experimental/atmospheric black metal outfit White Ward since the release of their 2017 albumFutility Report. The band have continued to wow me with every release, adding new colors and sounds to their rich auditory landscape. However, with this year’s False Light, I believe White Ward has supplied us with the full package. From the album art and supplemental visual materials, the record seems to reflect upon suburban decay and forgotten structures, a very possible meditation on their war-torn native country. All of this can be surmised before even hearing a single note of music.

The music perfectly reflects the dystopian nature of first impressions. The band have kept the foundation of their powerful and sprawling black metal assault with loads of atmosphere and jazz noir saxophone inflections, but this time adding in influence of spacious, dark, and gothic neofolk akin to something like Current 93, Death In June, or King Dude. This inclusion adds unexpected dour clean vocals and dreary melodies accompanied by acoustic guitars. There is even a trumpet that sits somewhere between Miles Davis’s smoky fusion and Ennio Morricone’s masterful Spaghetti Western film scores. In summation, this album is not something I can truly describe in words. My best recommendation would be to pick it up on vinyl, sit down with it on the stereo, pour over the breathtaking photography by Lucas Deshazer, and get lost in the sonic journey.

Still craving more? I compiled a playlist of 100 tracks released in 2022 from 100 different metal bands, including songs from the albums listed above. If I missed anything from your favorite band, it’s definitely because I’m trying to spite you (yes, you, the person reading this). Send any suggestions/hate mail to noisecontrolSTL@gmail.com, or message me on IG @noisecontrolSTL. | David Von Nordheim 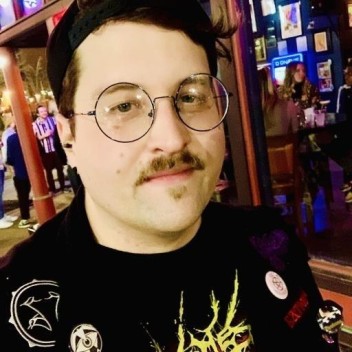