There are seemingly two feelings that Radiohead elicits among those I know. The first line of thinking goes, “They’re so depressing, I don’t know how you could listen to them for two-and-a-half hours.” The second is one of pure elation. The depression comes from the lack of ability to see them live on any given night. There is beauty in that raw emotion and vulnerability, catharsis.

The benefit of being a 30-year-old married human with no little humans is that sometimes you can decide to do things like travel several hours to see 42 different songs over two nights from one of your favorite bands. Also, there was Lou Malnati’s. If they were making a commercial for not having children, the version that sells me might very well look like this weekend. Anyway, enough about me.

Between July 6th and 7th, Radiohead overtook the United Center to begin their summer 2018 tour of North America. It could easily be said at this point that you’d be likely to select a Radiohead setlist by opening up your music-app of choice and hitting shuffle on everything except Pablo Honey. As a diehard, it’s exhilarating. As anything else, it could be extremely frustrating, but again what does a casual Radiohead fan even look like?

In a post-In Rainbows world, it very likely focuses on that album, not their famed OK Computer. The biggest applause both nights by far were given to Rainbows tracks “Weird Fishes/Arpeggi,” “Nude,” and “15 Step.” Night one featured a whopping fifty-percent of the bands 2007 album. Night two… only saw the band play one, “Bodysnatchers.”

The band obviously takes pride in its broad playset of tunes. One can hardly blame Thom Yorke if he doesn’t always remember all the words to “Decks Dark,” which he nailed on night two but flubbed a bit on night one as he instead sang “I can’t remember the fucking words.” This isn’t to say there were no weak points. While hearing “Spectre” provided some bragging rights, it isn’t hard to imagine why James Bond producers passed on the track for Sam Smith. “Myxomatosis” also seemed to be missing a little of the edge it had the second time around, though I won’t dismiss that it could have been my sitting further away that diminished it.

One track that certainly wasn’t lacking in vigor was Pablo Honey’s “Blow Out,” which has only been played a handful of times in the last two-plus decades. The song absolutely raged and gave the first night’s set something that “My Iron Lung” couldn’t quite account for night two. It stood out in almost direct contrast to the rest of the set, which is why the band probably generally avoids Pablo Honey material, but one could argue that is exactly why they should go there more often. It jars the senses.

Though the night two setlist originally featured “Present Tense” and “Optimistic” as second encore tracks, instead they were replaced by duplicates from night one, “Everything in its Right Place” and “Pyramid Song.” This surely pleased fans that could only make it the second time around. The prior no doubt works better as a closing track as it was on night one. Yorke and the rest of the band can wander off leaving Colin and Jonny Greenwood to metamorphose the track. Yorke’s vocals loop in various versions of “yesterday I woke up sucking a lemon” until it fades away, with only roaring applause left in its silence.

All things being equal, I’ll give night one the slight edge. Even though set two may have been slightly more balanced between albums not named In Rainbows, the inclusion of “Blow Out” blew away “Spectre.” The band seemed to have a rawness the first night that was slightly tempered and led to a more rarity friendly second night. Maybe that’s the casual fan in me.

Openers—Shye Ben-Tzur, Jonny Greenwood, and The Rajasthan Express, performing under the banner of Junun—began both nights. The collaboration produced an album in the form of a 2015 release alongside a documentary by Paul Thomas Anderson. It’s easy to connect the dots and see why the project appealed to Greenwood and why they would have brought the act along as support.  “Kalandar” closed out the bands set making sure to feature as many members of The Rajasthan Express as possible, including the excellent brass section and harmonium player. | Bruce Matlock 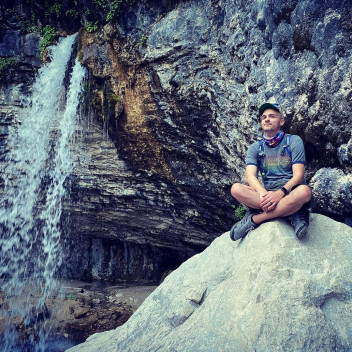 View all posts by Bruce Matlock